Pastor Ed and Danna Fink have been members of Faith Bible Chapel South for more than 22 years.

Ed accepted Christ as his savior when he was fourteen years old. A fellow high school student had invited him to attend the city-wide Youth Pizza Blast.  “I had only been to church once before that,” Ed says.  “I believe it is so important to invite the unchurched [to church],” Ed adds. “If someone hadn’t invited me, who knows where I would be.”

Pastor Ed received a great deal of Biblical training at Oklahoma Baptist University, and his education continued as he learned from many great men of faith through the years. 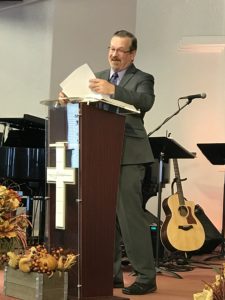 After meeting Danna at University and marrying in 1990, Ed was asked to move to Colorado and work with the youth group in July of that year. Since then, Ed has also come to oversee the food bank, men’s ministry, and other church administration functions in addition to his continued work with the youth.

Danna is a preacher’s kid who accepted Jesus as her savior at the age of six.  Her father, Dr. Dannie Fisher, who is Pastor Emeritus at FBCS, was in ministry for over 40 years.  His ministry took he all over the globe, and Danna spent five years of her childhood in Europe, learning and growing in the Lord.

Danna has her Bachelor’s degree in Telecommunication, her Master’s degree in Education, and is now retired after working ten years as a teacher in Douglas County.  She uses the skill sets of both of her degrees in being the Director of Children’s Ministries and the Director of Media and Marketing for FBCS.

Together, Pastor Ed & Danna have two teenage children; Danielle, who is 19 and a student at Metro State University, and EJ, who is 17 and a senior at Douglas County High School.  Both have responded to the Lord’s calling in their lives:  Danielle just spent five months traveling the world in ministry with Youth With a Mission (YWAM), and EJ accepted the call into pastoral ministry while at youth camp in Estes Park.

The Finks believe that they are the recipients of God’s great mercy and favor in their lives and enjoy being able to spend their lives ministering to others.